Under his leadership, the treatment of tuberculosis was developed with a therapeutic collapse. In 1941 IG Doctoral dissertation was defended. Gasparyan, theses of A.M. Volokhvyansky and M.E. Eisenberg In 1944 in connection with the expansion of the Tashkent State Medical Institute on the basis of the course of tuberculosis a department of tuberculosis was created, headed by prof. I.G. Gasparyan. In the same year, IG Gasparyan organized the Society of Phthisiatricians. For the 1950-1952t. 2 candidate dissertations are protected. During this period, among the department assistants were: T.A. Shiyapova, V.I. Washenko, G.V. Senokosova, TS Khaidarov, S.A. Karabasheva, S.A. Finkel Since 1952 to 1964 PhD dissertations are reserved. The main scientific direction is the development of surgical methods for the treatment of tuberculosis. In 1965 the department was relocated to the city clinical hospital №1.

By this time, 2 assistant professors work at the department: A.A.Akhrarkhodzhaev (1967-1970), M.N. Rizayev; 2 candidates of medical sciences: V.I. Vashenko, S.A. Finkel and teachers without a scientific degree: S.A. Arifov, A.G. Ganikhodzhayev, S.A. Slobodskoy, D.L.Tayberg, S.K.Shermatov, D.I.Ataullaeva. During this period, the department’s research is the study of functional changes in the cardiovascular, respiratory systems, and the state of the liver in various forms of tuberculosis and its treatment. 1 doctoral dissertation and 2 master’s theses have been defended. 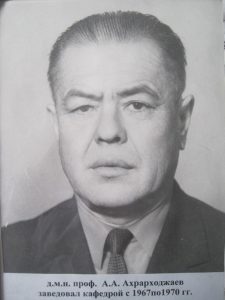 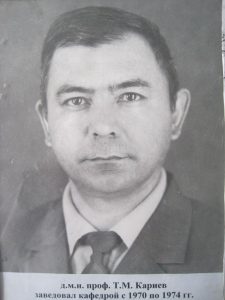 In 1974 in connection with the translation of prof. T.M. Karieva to another job the head of the department becomes prof. A.A. Kalanhodjaev (1974-1977). 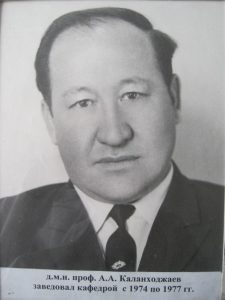 Since 1977 1989, the department is headed by associate professor B.A. Abrarov. The main scientific direction is the diagnosis and improvement of methods for treating patients with pulmonary tuberculosis. During this period, 2 candidate dissertations were protected, 2 author certificates and 2 certificates for rationalization proposals were received. In 1980 The department relocated to UzNIIF. By this time, the department worked: 2 associate professors, B.A.Abrarar, F.I.Tursunov; 13 assistants, 8 of them with the degree of M.K.Umarov, R.R.Kurbanov, K.K.Karimjanov, S.A.Slobodskaya, Yu.N.Leybzon, F.A. Khodzhiyev, M.I. Khodjaeva, S.A.Arifov, D.L.Tayberg, Sh.M.Manapova, K.K.Adylov, T.V.Baranova and others; 2 technicians and 2 preparators. 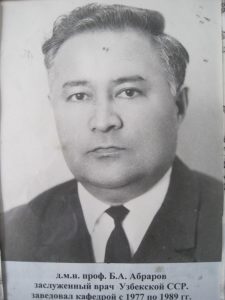 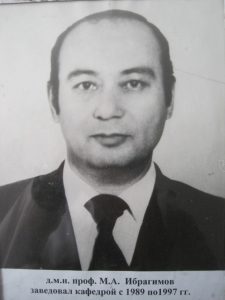 The head of the department of tuberculosis of the 1st Tashkent State Medical Institute becomes the MD. Ibragimov M.A. (1990-1997).

The head of the department of tuberculosis 2 Tashkent State Medical Institute is appointed by prof. Eshankhanov M.E. (1990-2004) The main scientific direction is the improvement of the treatment of pulmonary tuberculosis. During this period, the department worked: MD. Ibragimov M.A., Associate Professor Tursunov F.I., Assistants: Kurbanova R.R., Umarova M.K. Khodjieva F.A., Manapova Sh.M., Arifov S.A., Adylov K.K., Kamullina G.T., Tashpulatova F.K. From 1993-1994 academic year The department introduced test control and rating assessment of knowledge, which required the development of regulations on the rating of the department and methods of test control and rating assessment of knowledge. The department created a test bank, which is constantly updated and processed. 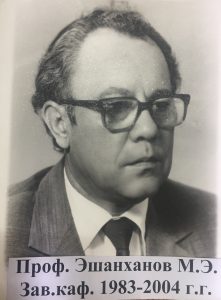 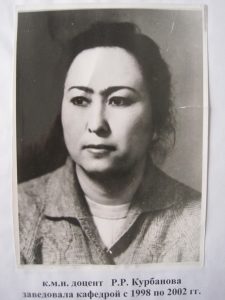 Since that time, the department work: Assoc. Kurbanov RR, Assoc. Khodjieva F.A., Ph.D. Absadykov F.T., which since 10/1/97, was replaced by M.R. Nurmukhamedova and Senior Lecturer Manapova Sh.M., Assistant to non-part-time Belotserkovets VG Since this period, the department has been working on the preparation of teaching tuberculosis to general practitioners. At the consultative polyclinic of the 1st Tashkent State Medical Institute, the tub.kabinet was opened as a base for GP training. The department continues work on training through clinical residency and internship. The main scientific direction of the department is to increase the effectiveness of treatment of destructive forms of tuberculosis. Special mention should be made of 1998, which was the anniversary year for the department. The department is 70 years old. Since 2000 at the department, training begins through the magistracy. The first for the magistracy in phthisiology were taken: Kachurov DA, Erimbetova KO, Ulmasova DD. Along with educational work, the staff of the department continues to take an active part in the medical work. Since 2001 academic year in connection with the departure of Kurbanova R.R. To another job, the department head is entrusted to associate professor Khodzhiev F. (2001-2003). By this time, the department work: Assoc. Khodjieva F.A., Ph.D. (F.R. Agzamova., Manapova Sh.M. They continue the 2nd year of study at the magistracy: Erimbetova KO, Ulmasova DD and accepted for the 1st year of study at the magistracy Saidova N.N., on clinical residency enrolled Otazhonov KO

Since 2003, the department has been headed by prof. Parpieva NN. The main scientific direction continues to be – to increase the effectiveness of treatment of destructive forms of pulmonary tuberculosis, the further development of the method of treatment with pulsed infrared radiation, which was started by Kurbanova R.R. in 2000

Since 2005, at the merger of 1 and 2 Tashkent State Medical Institute in Tashkent Medical Academy formed a single department of phthisiology and head.

Currently, 8 masters and 5 clinical residents are trained at the department.